Concepts of love and different levels of love

If you think of someone while reading these, it is an excellent indicator that your friendship is well on its way to last a lifetime:

1. You two connect with each other at a deeper level because you share the same value system.
2. You two feel the same way about a lot of things and react to most people and situations similarly.
3. Your friendship is not dependent on proximity, like being in the same class, school, building, office, gym, etc.
4. You both know that you are in each other’s mind even if you are busy with your lives.
5. You don’t nag each other about not staying in touch. This is different from playful chiding.
6. When you do catch up you can just pick up where you left.

7. Your friend comes to you for advice about personal issues and you are able to do the same with them.
8. You can keep their secrets till the end of time.
9. You are able to convey your true feelings and point of view about what they are doing or going through without the need for sugar coating.
10. They know that your have their best interests at heart.
11. They come to you to vent and for the truth.
12. You don’t take charge of their life by withholding information from them.
13. You don’t make decisions on their behalf and tell them years later or not at all.
14. You don’t worry about “evil eye” and are able to share important life events with them.
15. You stand up for them in a group of doubters and haters.
16. You are not jealous of them. You are not their ‘frenemy’.
17. You are able to address any misunderstandings/disappointments you have and reconcile the differences.

What other essentials would you add to the list?

What’s the worst thing about looking for a life partner?

Putting yourself out there.
Investing in something that might not work out.
Respecting the feelings of everyone involved(exhausting)
Getting rejected.
Saying No.
Saying Yes!

I think it is- saying no after saying yes.

Wouldn’t it be wonderful if we could be sure of who we really are and who we want BEFORE we start looking for someone? Or find out in one or two meetings. Our gut would just tell us and we could just dive in heart-first! So simple. So straightforward. If only it were that easy. In reality, you should VERIFY what your gut tells you and THEN dive in.

Romantic relationships can exist well in a vacuum but marriage is more democratic by definition. Future partners, their parents, siblings and extended relatives(ugh-they can be the worst) all approach it from their own point of view. Everyone has preconceived notions, fears, anxieties about marriage. They all feel like something is at stake. The girl is uprooting herself from her family. Her family has genuine concerns for her future happiness. He and his family have to live with this new person every day. They also have fears, apprehensions. What if she is a trouble maker? What if she spoils the peace of the family? No family is perfect. Will she accept his family members, who are just as uniquely-flawed as everyone in her own family? How will she deal with conflicts? Since everyone is so heavily invested, there can be heated debates. Multiple times. And that’s normal.

The biggest question is – Is he a man? I mean, is he a man or a mama’s boy? How mature is he? Can he take a stand? Can he take decisions on his own?

Marriage should be considered the true coming of age.  It is the time when a son ‘should’ become the new head of the family. He needs to spearhead this undertaking. He needs to foresee potential problems, differences in opinions and be that mediator, that point of contact. Until then, they are just grown-up-boys who have a job (in a career that their folks influenced them to get into at 15).

Conflict is built into this life-event. A modern man wants a bold woman, his parents want someone who is mild-enough-at-home, takes care of their son and becomes a good mother. Modern women want to be heard, to have a say, to be acknowledged. They want men to share in household responsibilities. Men or in-laws might not be mentally ready to give up that kind of control. That’s why the guy needs to step up to the challenge. He needs to ‘be a man'(read that in Russell Peter’s stand-up voice).

So, if you can find an independent thinker who questions hypocritical social structures, preconceived notions, if he can make his own rules in our present society which is in a state of flux, if he has a good head on his shoulders, you are sorted. In fact,  girl, you are golden! Be it an arranged marriage or a love marriage. That’s a jackpot.

Now, with arguments imminent on the horizon, the girl also has an equally critical role to play. She too needs to step up and realize that her parents won’t be able to shield her in every situation.  She will have to do her share of mediating.

She should never go into arrange marriage thinking that if things go wrong, she can shift the blame on her parents. She will have to take responsibility for the decision one day down the line.

The strength of a relationship is not measured when everyone agrees, it is measured by how the two people resolve conflicts when things go south. She needs to have enough bonding with the guy that at the end of inevitable arguments, there is still mutual respect left for each other. It is the true litmus test of how well the would-be couple communicates and become a team in the process. If the girl discovers and can convey to the parents, that the bond she has with the guy is strong enough to weather this storm, their main fear is put to rest. Parents are most worried about a lack of understanding between the new couple. However, if the outcomes of such conflicts are destructive or catastrophic, you need to STOP right there.

You need to pull the plug and say no. Why?

It is a sign that a non-negotiable has been uncovered.

Sadly, we are under the illusion that we are clear about what we want. In reality, we can only be sure of what we don’t want. Those are our non-negotiables. We have to discover what our non-negotiables are. That is a process of discovery and you can have that bittersweet fruit of self-knowledge only at the end of this scavenging experience.

The truth is, you might have to say no to multiple people. And, multiple people will say no to you. Rejection is never easy but you have to trust that struggle. You will have to remind yourself that deep down, you are a loving person, capable of giving a lot of love and you are worthy of having loving well-wishers in your life.

Remember, saying NO to the wrong one is easy, saying YES to the right one is really tough. So don’t be afraid to say No to the wrong ones, do them a favor and get them out of the way quickly. You’ll need an extra time and a shot of courage to say no the ‘kinda-right’ ones. The kinda-right ones are exhausting, they can do the most damage and are the hardest to say no to. It can physically split your brain, heart, soul into pieces. You might make some Horcruxes in the process. But remember, the reddest of flags reveal themselves only AFTER you get to know each other closely. “Perhaps the story you finish is never the one you begin.”-Salman Rushdie, Midnight’s Children.

You will have to get your feet in the pond, your dress, your glass slippers muddy and soaking wet, catch and kiss slimy frogs (eww..) until one of them turns out to be the prince. There is a very real chance that you’ll get wet, muddy, slimy (read hurt).There are no shortcuts here. Big surprise!

You have to THINK LONG TERM. It’s OK to say no to the ‘kinda-right’ one and take this punch in the face once. Over time, the bruised eye will heal. It is 1000 times better than living with the slow-drip of toxic regret each day of your life. We all know relatives, friends who are in such marriages.

How do you identify the ‘kinda-right’ guy?
You give him the benefit of the doubt way too often.
You find yourself justifying his behavior to yourself and the family.
You are afraid of the consequences of saying no. You feel you’ve come too far, it’s too late.
You feel you need to live out a certain storyline in your head. ‘How could this be happening to me?’
You are in denial about your expectations and the reality. ‘It’ll get better once… so and so happens.’

By saying no to an incompatible person/family, you are doing yourself, your family, him and his family and your future children a huge favor. You’re saving everyone from unending arguments, anxiety, headache, venting over the phone to your family, friends, colleagues, verbal fights, health issues, unhappy children and possibly, divorce.  It is super important that you have the patience to hang on until you find the person who is just right for you. Not perfect. Just right.

Richa brings you only the most practical, to-the-point, no-nonsense information that helps turn your house into your dream home. She has a passion for simplifying design concepts that you can actually put to use. She has a degree in Architecture, over thirty published articles, a life blog and has co-authored the amazon.com bestseller 'My First Home' with Shashank Shekhar.

This amazon.com #1 bestseller, is written with the sole purpose of making the home buying process easier. This step-by-step guide is full of infographics that help demystify the process of buying and decorating your first home. Get your copy of "My First Home" today. 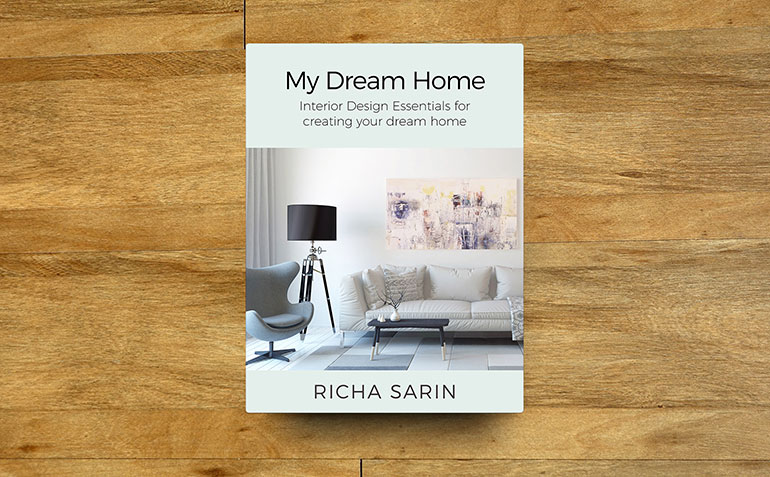 This ebook equips you with everything you need to know to turn your home into a stylish haven. Detailed examples with colored illustrations help you discover the look you want and get practical tips and tricks to achieve that look easily. You’re welcome!